Champions across Wales have been helping us promote Shwmae Sumae Day, the national day of celebrating the Welsh language, held on the 15th of October each year. These champions encourage the act of starting each conversation in Welsh and using simple phrases, as a means of normalising the language.

We are very proud to announce that our third champion this year is Nic Dafis – originally from Chirk near Wrexham, and who now lives in Pontgarreg near Llandysul. Nic is a Welsh language tutor for adults, working through Aberystwyth University and teaching in Cardigan. Welsh was not spoken in his family home in Chirk, the last Welsh speaking ancestors were from the generation of his great-grandmothers and great-grandfathers. It wasn’t until he moved to Cardiff and started work in a Welsh book shop in the city that Nic decided to think seriously about learning Welsh. With the strong support of his employer, he attended “Wlpan” classes through Cardiff University, and learnt quickly: by the end of the first term he could answer the phone in work, and by the end of the first year, he could cope with interacting face to face with customers, rather than hiding in the back of the shop, unpacking boxes! Soon after finishing his “Canolradd” (intermediate) exam, Nic moved to west Wales, to live near Llangrannog, and soon after found himself teaching night ‘Mynediad’ (beginner) classes as a tutor. At the same time, he began keeping a blog called morfablog.com (the first ever Welsh language blog in Welsh), and in 2002, he launched the discussion website maes-e.com. The online work continues as he currently provides an online newsletter to learners in the Cardigan area, which includes the blog dysgu.com. He is also channelling more of his energy into contributing to the Extinction Rebellion/ XR campaign. He works with others to make sure that the Welsh language is used within the climate movement, whilst also trying to attract more Welsh speakers to be a part it. As he goes on to explain:

​“I have a particular interest in bridging the two worlds of learning and teaching Welsh and being active in the campaign to tackle the Climate Emergency. Extinction Rebellion, as a global movement, have been more than happy to support Welsh speakers within its organisation, but we are a small minority at the moment, with much less presence within the organisation compared to that on the ground. There is a higher percentage of Welsh speakers in Extinction Rebellion groups in traditional ‘non-Welsh speaking areas’ than there are in the traditional Welsh speaking areas. I am eager to encourage more “XR Rebels” to learn the Welsh language and at the same time, persuade more Welsh speakers that they have a role to play in the climate campaign.”

“I see it as a very special opportunity to promote the Welsh language in our local communities, and to celebrate our language and culture. It’s really important to get a message through to those who might be uncertain about their proficiency in Welsh – maybe people who don’t have the opportunity to speak the language every day – that their Welsh is brilliant, and that they have a role to play in the effort to reach One Million Welsh Speakers by 2050. As someone who has used just as much Welsh online as I do in my surrounding community, I would like to think that I have a role to play in discussing my learning experience with others, and to promote the Day via the network of friends and contacts I have through social media.”

Diolch yn fawr to Nic for supporting the campaign this year! Contact swyddfa@dathlu.cymru for more information and support, and see our website, www.shwmae.cymru for resources to help you celebrate the Welsh Language on the 15th of October! 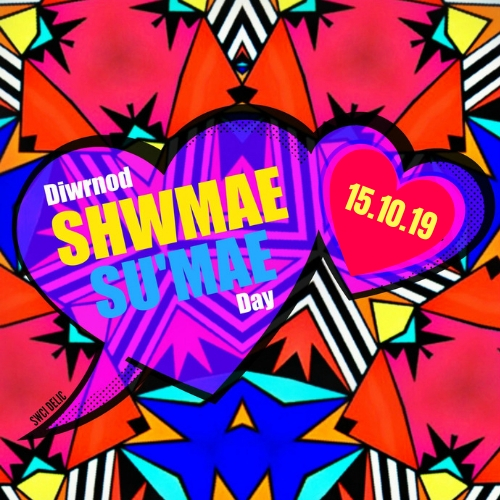